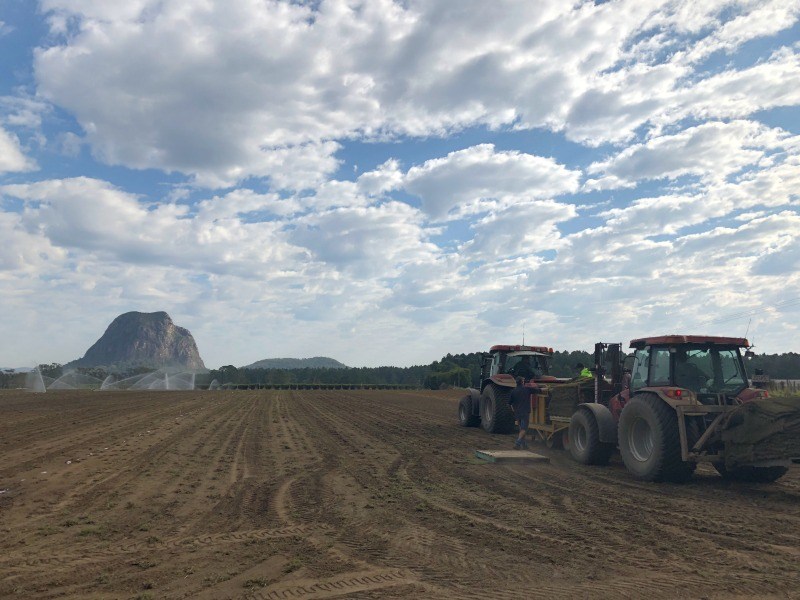 Ensuring our turf is weed-free and of the highest quality doesn’t happen overnight, it starts from the moment we plant or regrow our crops. Wild Horse Turf’s chief grass grower Dean spends his days taking care of your future lawn to make sure it’s of the highest quality, and he does this in a variety of ways. Why planting new crops are crucial

Ideally located in the Sunshine Coast, Wild Horse Turf has three properties, each growing a certain variety of grass. These include the easy-care Empire Zoysia, the resilient Wintergreen Couch and the much-loved Palmetto Buffalo.

Dean says being a turf farmer isn’t just a matter of harvesting and regrowing a crop year after year for decades. Every seven or eight years an entire new crop of each variety is planted to make sure only the best grass is grown and delivered to customers.

“After a few years the paddocks get a bit tired and we need to revamp them and start afresh. Before planting a brand new crop we get soil tests done to ensure it’s of the highest quality. Only when the soil is at its best do plant a new paddock,” Dean says.

“Another reason we start afresh every few years is to ensure we are able to make each crop that little bit better for our customers, planting a new crop is how we do this. It’s also a way of making sure yields don’t go backwards.” Brand new paddocks are usually sown in the cooler months of August or September. Dean says this is the best time to do so because if pesky weeds do emerge they are not as prevalent and the grass varieties he grows usually out-compete them.

“Usually around August we plant new crops because it’s not as hot here on the Sunshine Coast and the watering requirements aren’t as much. In addition, the grass is established by the time spring arrives and you can push it along with fertiliser,” he says.

Dean says refreshing their grass every few years also allows Wild Horse Turf to take advantage of technological advances in growing techniques and crop maintenance, something he takes a keen interest in.

Some varieties are ready for first harvest before others

A new crop of couch would be ready for its first harvest in about 4-5 months, whereas the slower growing Buffalo varieties and Empire Zoysia would take more like 9-12 months. Dean says the different growing times is reflected the price per metre for the different grasses.

When harvesting Buffalo varieties Dean leaves a two-inch ribbon of grass and the crop re-grows from this. Interestingly, when Wintergreen Couch and Empire Zoysia are harvested no grass is left behind and the crops grow back from roots or rhizomes. Taking a preventative approach to weeds

Dean says pesky weeds are a fact of life for all turf farmers, but tackling a potential problem before it arises is how Wild Horse Turf deals with the situation.

“About a week or so after harvest growth starts to come back and then we spray it with a pre-emergent herbicide. This usually stops the first lot of weeds in their tracks so they struggle to take hold; the same is done for all varieties,” he says.

“It’s much easier to stop weeds from showing themselves rather than having to spray them afterwards. We prefer to be ahead of the ball game because often using a post-emergence spray can slow down the growth of the grass.” Remaining vigilant is the key

With a sharp eye, Dean says he and his team are well trained in spotting weeds and other diseases, although it’s not a common occurrence thanks to their forward-thinking growing techniques. Other than that, it’s just a matter of regular watering and some good old-fashioned TLC.

“We recently finished planting a paddock with a bird’s eye view of the Glass House Mountains, and as I was leaving I cast my eye across the grass and saw something was amiss. I thought to myself ‘I don’t remember planting anything pink’, and as I got closer I realised it was a pair of my daughter’s thongs lying upside down in the paddock,” he says.

As you can see nothing gets past the team at Wild Horse Turf, so if you’d like to inspect their farm or need a quote for you next project, call us on 5496 9790.

Behind the scenes: Harvesting