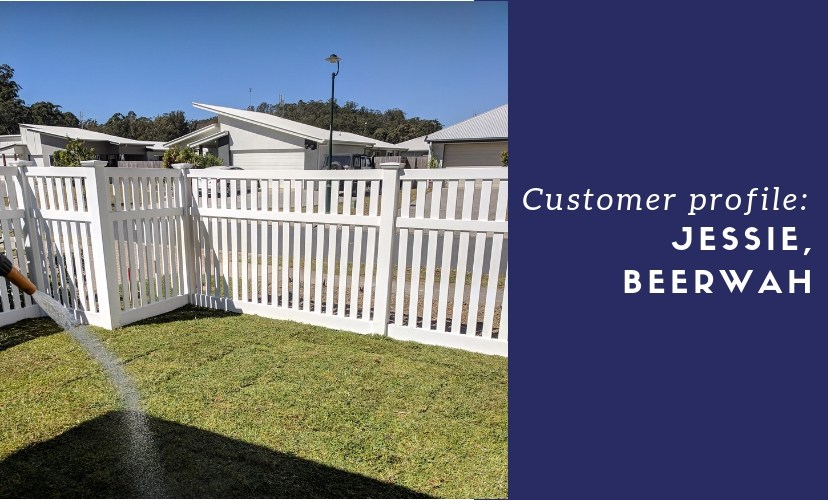 Following the build of her Beerwah home, Jessie Van Der Zanden started researching turf farmers on the Sunshine Coast and went to a garden expo and spoke to a few turf growers. She says she decided to go with Wild Horse Turf because they were a local business with amazing customer service. “At the expo I asked the blokes there lots of questions and it was like they didn’t seem too interested. But when I spoke to Brett from Wild Horse Turf and he offered to come out and measure my property, my decision was made,” she says.

Jessie says she went to Wild Horse Turf’s farm in the Glass House Mountains to inspect the different varieties they grow. She was deciding between Empire Zoysia and Sapphire Buffalo and got to see both; she initially chose the Zoysia.

“When Brett came to measure up and realised I had a large rescue rottweiler, Walter, he suggested I go with Sapphire Buffalo because it grew slightly faster than the Zoysia and was suited to properties with pets; who often lawns a hard time,” she says.

“Also, because I have a corner block with sections of land that are often in shade, he explained how tolerant the Sapphire Buffalo grass and that it would still thrive in such conditions. I loved that he was happy to answer all my girly questions.”

She says Wild Horse Turf co-owner Amanda helped make the financial transaction an easy one and she followed Brett’s recommendation to get a little bit extra turf just in case. The turf was delivered on a Friday afternoon and she enlisted her friends and family to help lay her new lawn.

Hint: If you’re not sure how much turf you need – try our turf calculator?

Jessie says she provided the ‘food and watering’ and her handy team of installers got to work putting down the turf. Her parents had already killed all the weeds and she had invested in high-quality top soil, as recommended by Wild Horse Turf.

“Brett’s advice was not to go cheap and nasty with the toil soil in order to give my lawn the best start. We didn’t need to put the soil on all parts, this area used to a pineapple farm so the existing soil is good quality,” she says.

It took Jessie’s friends and family about 3.5-hours to lay 167sqm of turf, and because they had done it before they were aware of the process and spent a decent amount of time rolling it. Next came the watering, which was helped along by recent rain.

However, Jessie says Brett advised her to still give her new lawn a decent soaking despite the rain and so she bought a soaker sprinkler. After a few weeks, Jessie did the corner test whereby you gently lift up the grass to see if the roots are established. Much to Jessie’s delight her Sapphire Buffalo was almost fully rooted in all places.

But it’s her beloved Walter who is most smitten with her new lawn, Jessie says she took him on it and it was like the first time he’d ever touched grass and he loved it. Like most dogs, he has dug a hole in her new turf to get to a smell buried underneath, but she’s just filled it in with topsoil and Brett told her the lawn will repair itself.

“I took Walter on the lawn yesterday and he jumped on it and I know he’s starting to see it as his; and once he has his balls and toys on it it’ll be like home. I’ve also told him to stop digging so once my lawn is fully established I know he won’t be tempted to dig it up anymore,” she says.

Jessie says she can’t fault Wild Horse Turf’s after-sales service, with Brett calling in to check-up on her lawn’s progress. She appreciated that he was happy to continue answering all her ‘silly questions’ in regards to her new lawn.

Now all she has to do is plant the native trees she’s ordered and finish her garden beds and then the landscaping on her Beerwah home will be complete – in part thanks to Wild Horse Turf. It gives us such a thrill to get positive feedback from our valued customers. We make a point of treating everyone with the upmost respect, whether they are buying 100sqm or 1000sqm. We also pride ourselves on being completely transparent and as helpful as we can.

Get in touch with us today and we’ll discuss which variety of grass is best suited to your next project. Call us on 5496 9790.