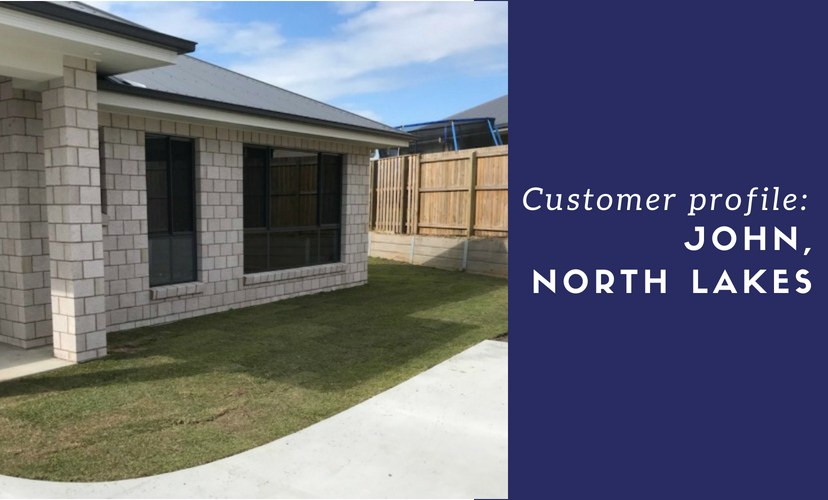 As a family-run business Wild Horse Turf prides itself on delivering outstanding turf and exceptional customer service. Everyday we strive to go above and beyond all expectations, so when we get fabulous feedback from our satisfied customers it’s all we can do not to shout it from the rooftop of our harvester.

But instead of doing that (because safety first) we’d like to share with you John Cameron’s experience with Wild Horse Turf. He recently finished the build on his forever home at North Lakes and was searching for a quality lawn at a reasonable price to complete the look of his property.

He found us online, and when researching a variety that wouldn’t get a thick thatch; he came across Empire Zoysia, arguably Australia’s top-selling Zoysia grass. Known commonly as E.Z grass, John wanted to see this variety for himself and so arranged to visit our Glass House Mountains farm to check it out.

“I gave Brett a call and he arranged to meet us on the farm; we loved being able to see it growing in a large open area. But what we loved the most about our trip to the farm was being able to see Empire Zoysia growing around the house on the property,” he says.

“This showed us the more established version of the lawn and we could see that where it copped a lot of shade, and even during these coolers months, the turf was still holding its colour well. It was great to see how the lawn looked a few years after installation.” During the tour he asked about our delivery and installation service and how much it was going to cost to install per metre. John says considering he was buying 320m2 and had spent decent money on undersoil, the decision to spend a few more dollars to have it professionally installed was a no brainer.

Following the visit, John says he got a quote from us and then rang around a few other providers to do his due diligence. We’re proud to say that he found our quote ‘reasonable’ and others were ‘quite expensive in comparison’.

John says the turf was delivered first thing and then one of our team members arrived to mark out where the turf had to go. An hour or so later the rest of the installation crew arrived. The block did present a few challenges because it was slightly sloping and there were still some landscaping and concreting to take place. “We weren’t doing the entire property and some areas were concerning. There was some confusion about where a section of turf was meant to go and it was put in the wrong spot but was quickly moved. The guys always double checked to make sure they were on track in regards to where the turf was to be laid,” he says.

“They were a good team, and at the end the head guy came up and asked if I was happy with it, and then they used their large roller to level it out a bit to get the bumps and what not out. It was all done in two hours, for me to do that would take a good few days.” A week later John says he got a follow-up email explaining in great detail the best way to water his new lawn (short bursts to keep the sheet of turf damp) and a suggestion that he could use a foliage fertiliser such as Seasol.

“I then got a call from Brett who was checking to see how it was going and to make sure I was watering enough. He reminded me that even though it was cold and we were getting showers, the westerly winds might be drying up the turf quicker,” he says.

“They’ve been very good in follow-up information and the right way to water. Over the years I’ve put in a few new lawns and a lot of people tell you that you have to drown it, and then you end up with soggy turf you can’t walk on.”

John says he appreciated the friendly, honest communication he received from Wild Horse Turf and appreciated the way there was no ‘spruiking anything up’ and that the entire process was completely transparent. We asked John to give three reasons why he’d recommend our business to others, and this is what he said.

“Definitely it’s their friendly and honest communication as well as their fair and reasonable pricing, and the fact they are super easy to deal with. Anytime I had a question and they couldn’t answer the phone they’d return my message as soon as they were available.”

We love getting nice words from good folks; it helps us to get out of bed during those chilly winter mornings and reminds us why we’re in the turf business. Wild Horse Turf might not be the biggest turf supplier – but we are the BEST!

So if you want high quality turf backed up with exceptional customer service, Wild Horse Turf will deliver. Shoot us an email here or call 5496 9790.