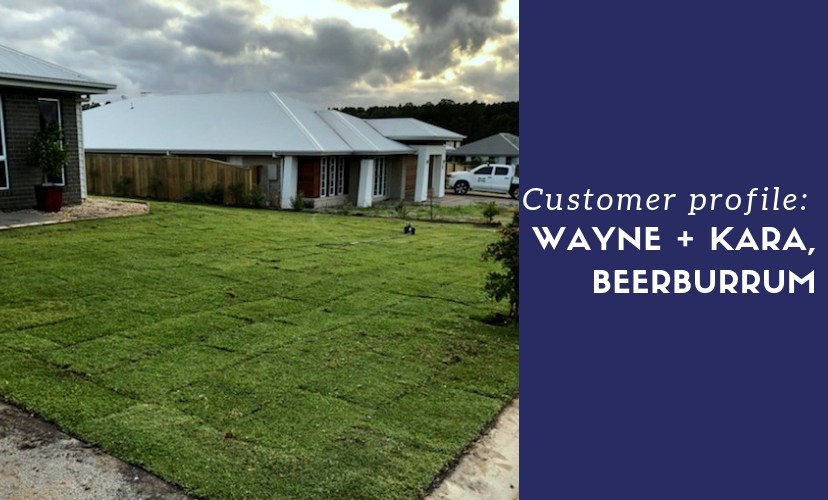 As a proud family-owned and operated business, Wild Horse Turf works hard to deliver outstanding customer service and grow the BEST turf on the market. So, it’s always a delight when we get fabulous feedback from kind folks such as Wayne and Kara Coombe from Beerburrum.

The couple built their dream home on a sprawling property and visited our Sunshine Coast farm to check the turf varieties that are available. Wayne says he saw an advertising sign on Steve Irwin Way, not far from where we’re located, and followed his nose to our property. “It was about 14 months ago that we turned up at the farm and spoke to Dean (owner) about our needs. While we weren’t in a financial position at that stage to purchase turf, we were shopping around for when we could,” Wayne says.

“Once we were in a position to lay turf it was a no-brainer to return to Wild Horse Turf, the service we received more than a year earlier really impressed us. As such, we then got in touch with Brett (sales manager) and ordered 900sqm.”

Wayne says because of the large amount of turf needed and the variety he wanted, Coastal Buffalo, it’s took a little toing and froing between himself and Wild Horse Turf. Brett then took him down to the farm to inspect the turf he’d be buying and sealed the deal. “It was truly a positive experience, as a capable male I try not to ask questions but I felt like nothing was a problem, every stupid question I had was always answered. Importantly, the answers were in my best interest. I felt comfortable to ask anything, I never felt like an idiot and Brett gave me honest answers,” he says.

“I had read online about fertiliser and soil and Brett advised me that putting fertiliser under soil before laying turf would be a waste because following heavily watering it would leach out. He also told me that it was a mistake to try to skimp on quality top soil because it really makes a difference in regards to how the grass would grow.”

The turf was delivered during a freak heatwave in October, and while it was challenging to say the least, Wayne says he set his alarm at night so he could get up and water the recently laid turf. The heat continued for four days, as did his midnight watering, and while some patches struggled, he wasn’t panicking.

“There was nothing we could do, Brett came out and had a look and it will recover and for the patches that don’t we’ll either replace them or figure something out. During the heatwave when I was up the middle of the night my wife joked that it was like I was up tending to a new baby.”

The Coombes say they’re excited their new lawn will be ready for kids to run amok on during the Christmas holidays, and Wayne says he can’t wait for games of footy, soccer and cricket to be played on his Wild Horse Turf. We always go the extra distance for our customers, so get in touch with Wild Horse Turf today and get a quote on turf for your next project, no matter how big or small. Call us on 5496 9790.